Pacifico: If you build it, who will come? 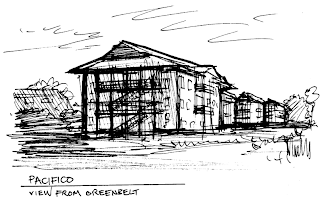 In my co-op travels past I had heard many a story of Pacifico, often in the form of hushed tales of it being a failed co-op.  But one night on the road up to Davis, I also heard a deeper, more mixed story, about how Pacifico, in spite of – or perhaps, because of - its chronic vacancy issues and lack of community, became an unusually diverse co-op, with lots of youth from low-income backgrounds and Asian international students – two demographics often lacking in the other more successful co-ops I’ve known.

And so, on a recent trip to Davis with a few other Berkeley co-op folks, I decided to see it for myself.  With directions from fellow co-opers at J Street Co-op, we biked in the cool summer evening air from J Street to Pacifico.  The roads and trails brought us along electrical substations, over the freeway and railroad tracks, and into suburban South Davis, a completely different world of six-lane roads, strip malls, and fancy garden apartments.  Gliding through the parking lots of one of these, we finally arrived at a row of darkened buildings at the edge of town.  The parking lot was mostly empty and the yard out front neat but completely dead.  Walking closer though the unmistakable signs of co-opness came into view: a large bike rack, a fire pit with chairs, a hammock, and a garden with four neatly tended raised beds. 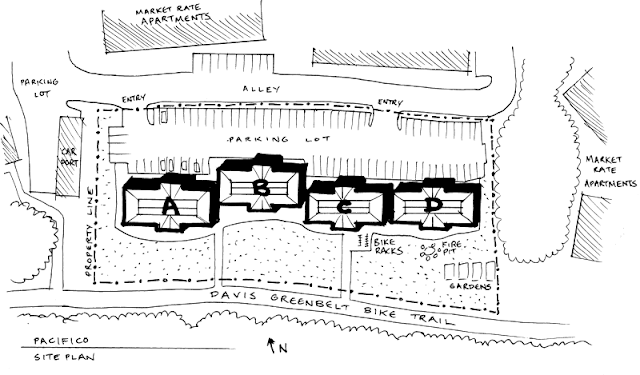 Wandering around a few minutes, we finally saw someone come out on the third floor balcony overlooking the courtyard.  It turned out to be one of the last original residents, getting some fresh air while having his last dinner at Pacifico – he would be moving out the very next day.  He invited us upstairs, and we climbed the deserted metal and concrete exterior stairs to the 3rd floor doorway.  Inside, the building looked like an empty dorm, with white walls and institutional flooring, bulletin boards, and overhead fluorescent tube lighting.  Aside from our host and his partner, there was no one else around in the common space, partly because of the vacancies but mostly because it was summer and all the Davis students had gone home.

The common space featured a sink and fridge, a TV, and a table with just four chairs – in retrospect, a tiny number given the floor’s capacity of 10 residents.  A bag of groceries sat on the table and three cases of Pacifico beer were on the counter in the corner.  We talked and rambled on for a good forty minutes about the changes coming to Pacifico before making our way back to the Domes, where we were spending the night. 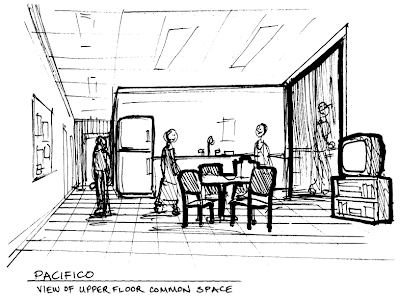 Built in: 2000, 4th building added in 2004
Construction cost: $4 million
Financing: 60% from bank loan at 7%, 25% from City of Davis loan at 6.5% & 3.5%, 15% from loans from other cooperatives at 8%.
Building type: Four 3-story walkups built to be co-ops
Occupants: 112 (28 in each building)
Room mix: 82 singles (84-114 sf), 14 doubles (133-202 sf), 1 studio apartment
Parking: 70 spaces
This grand project grew from a meeting between Davis Campus Cooperatives and the Japanese Consumer Cooperatives in 1988.  DCC was a young co-op consisting of two small houses that had just opened that year.  From the meeting, DCC received a commitment from the JCC to loan $400,000, which it used to gain support and additional loan pledges from the City of Davis and other NASCO student co-ops towards the opening of more co-ops.
In 1998, an opportunity came up when a new market rate apartment development needed to fulfill its city-mandated inclusionary housing requirement.  The project’s birth as an inclusionary housing project necessitated new construction and also determined the size and location of the project.  The developer provided the land, and the NASCO, other co-op, and City of Davis loans were used to leverage traditional financing from local bank First Northern Bank which covered the remaining 60% of the cost.
Initially, three identical buildings were constructed to house 84 students.  To maximize efficiency, Pacifico used a double-loaded corridor plan with minimal common areas.  Small common areas were provided on the upper floors, with the main kitchens on the first floor.  A large community building was to be put off until later.  To honor its funders and Co-op values, the buildings were named Kyoto, Unity, and Rochdale, though in practice the address letters A, B, and C were more commonly used. 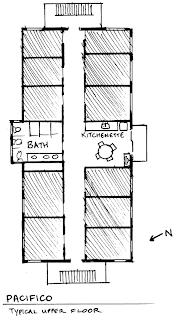 Due to its large size – Pacifico had more rooms than all the existing Davis student co-ops combined – and distant location from the UC Davis campus and downtown, Pacifico was plagued with vacancies from the beginning. 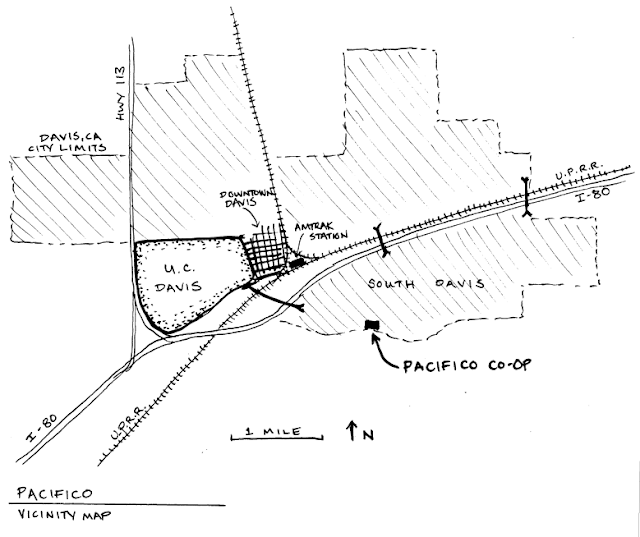 Other Davis co-ops had the luxury of interviewing and selecting from a long list of prospective residents.  Pacifico needed to aggressively recruit international students to fill the rooms.  Language barriers, lack of interest in cooperative living, management by professional property management company rather than residents, and inadequate common spaces all contributed to a subdued sense of community.
The building itself, though modern, earthquake-safe, and ADA accessible, had issues with water pressure and sound insulation.  The central air ducts provided a great way of funneling noise from bedroom to bedroom. 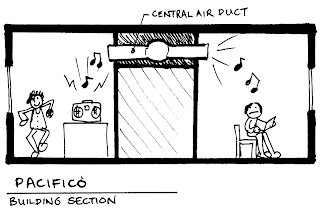 Although vacancy rates remained high, a fourth identical building was constructed in 2004, with the idea that it would bring in more revenue.  Instead, Pacifico continued to struggle along.  The planned community building never materialized.  In 2006 NASCO stepped in and set up co-op style member management, however, vacancy issues persisted and worsened with the 2008 housing bust.  This led to the 2009 mortgage default and subsequent bailout by the City of Davis, which purchased the property for $1.6 million to preserve it as affordable housing.
The California Center for Cooperative Development also made an attempt at a turnaround.  However, by 2010 the vacancy rate had exceeded 70%, and the buildings felt empty even with the remaining residents consolidated in buildings C and D.  Management was turned over to the county housing authority, Yolo County Housing.  YCH began to fill the vacant rooms with youth aging out of the foster care program.
At the time I visited, Pacifico had a mix of international students, former foster youth, and a diminishing group of what one might call traditional co-opers.  The member I met was one of the latter, and he reminisced on the mutual learning between the groups in the last two years, but lamented that the shrinking number of people dedicated to the cooperative movement threatened the long-term prospects of the community as a co-op.  Plans had been drawn up for converting all but one of the buildings into apartments, though no work had happened yet, perhaps due to the estimated renovation price tag of $2 million.
Riding down the greenbelt path back to downtown, we passed a few other cyclists amongst the silent trees, apartments, and office parks of South Davis.  One might describe the whole evening as hypnotically peaceful, perhaps pacific…
Lessons from Pacifico
As a student co-op, Pacifico suffered from a distant location and its large size.  Whereas the Berkeley co-ops and the Austin co-ops have successfully developed and filled even larger buildings, 112 spaces far exceeded the demand at Davis and the community-building capabilities of DCC and NASCO.  Furthermore, the lack of a common space large enough for all the residents, even at reduced occupancy, hampered community formation.  Fortunately, the decision to build multiple buildings instead of one large one allowed a graceful partial shutdown of the project, with two buildings offline and two occupied.

Looking at Pacifico as an affordable housing project, co-op architecture could have provided a lower cost than traditional apartments.  Pacifico costed only $36,000 per resident to build, though if the actual occupancy rate is used, this number climbs to $50-70,000.  In retrospect, perhaps some of the buildings could have been built as apartments from the beginning.

Finally, viewing it as a social experiment, Pacifico created a rare community of folks from mixed socioeconomic backgrounds.  As far as cooperativity, at the end of the day, it was still by far the most cooperative place in all of suburban South Davis and certainly more communal than an ordinary apartment complex would have been.
References:
City of Davis Staff Report - Pacifico Cooperative Memorandum of Understanding (August 2006). Includes financing and project history.
http://www.city.davis.ca.us/meetings/councilpackets/20060801/03D_Pacifico_Cooperative.pdf
City of Davis Staff Report – Pacifico Property Management and Redevelopment (June 2011. Includes new management plan by Yolo County Housing and pictures of maintenance work and cleaning.
http://cityofdavis.org/meetings/councilpackets/20110621/10-CC%20&%2006-RDA%20Pacifico%20Property%20Management%20&%20Predevelopment.pdf
Pacifico Co-op website: www.pacifico.coop
Davis Wiki: http://daviswiki.org/pacifico_student_cooperative_housing
Wikipedia: http://en.wikipedia.org/wiki/Davis_Campus_Cooperatives
“Pacifico Reconstruction Remains Uncertain” California Aggie (February 2011): http://theaggie.org/article/2011/02/07/pacifico-reconstruction-remains-uncertain
Posted by alfred at 8:20 PM 5 comments: