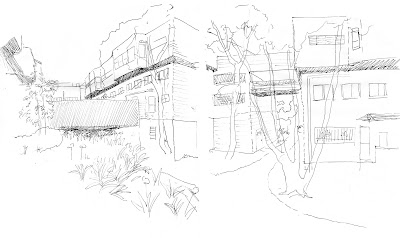 I met Oscar, the President of Rochdale Village Cooperative Apartments and a current resident, in the courtyard (pictured above).

History:
Rochdale Village was constructed in 1971 on the site of the McKinley Continuation School.1 It was named after the English Town of Rochdale, Greater Manchester, England. It was in this town that the Rochdale Pioneers decided on the Rochdale Principles of Cooperation. The principles were revised by the International Co-operative Alliance in 1966 and are still in use today.2
The project was part of an effort to expand low-cost housing for UCB students. The Berkeley Student Cooperative nonprofit received a low-interest loan from the U.S. Department of Housing and Urban Development to carry out the project. Years earlier, Harry Kingman had led co-opers to lobby Congress to make student co-ops eligible for this kind of loan.3 Since the 1970s, solar panels and high-efficiency furnaces and water heaters were added. 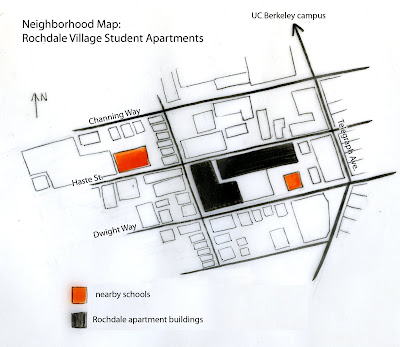 Rochdale is located in a flat area of the city, a short walk down Telegraph from UC Berkeley campus. The land is owned by the University and leased by the Berkeley Student Co-op non-profit. They renew the lease every ten years. Rochdale has a pretty good relationship with the University and the UCPD. The location is not without its challenges. On the weekend, pedestrians on their way between fraternity houses and bars are too loud for residents who are trying to sleep. The kids at the neighboring schools can also be loud during recess (Oscar was less concerned with this noise). Bikes and laptops were stolen when doors were left unlocked. Homeless people sometimes come into the courtyard and are asked to leave. If a fight breaks out, the UCPD are called.
Outdoor space: 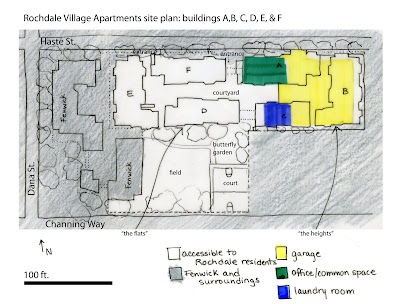 Although Rochdale has quite a bit of outdoor space compared to other Berkeley Student Co-ops, Oscar perceived there to be very little outdoor space. The backyard is home to the “Butterfly garden” that grows less than 1% of the food consumed by the residents. Residents put in 8 hours of work shift toward the garden or other home improvement projects per semester. They used to play a bit of basketball on the court and soccer on the field but that slower down a bit recently. The interior courtyard has seen a few parties over the years, but is primarily a place where residents pass one another as they come and go. Some of the top floor apartments have double-loaded corridors that are open to the weather. These outdoor spaces occasionally host parties that are not well attended and usually get shut down.
Oscar mentioned three different zones where parties are hosted: “the heights”, “the flats”, and a few apartments in building E where some members of the student group “Hermanos Unidos” reside. “The flats” are at ground level and “the heights” are above ground level (the parking garage runs underneath building B). Building C, D, and E are commonly thought to be the noisier buildings.
Common Space: 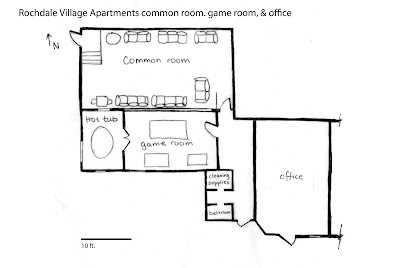 The most active common spaces are the laundry room, the office, and the common room/pool table room. The common room is used for social events and for making important group decisions every-other-Monday during council meetings. The hot tub was out of order and Oscar told me the computer room was rarely utilized. During my visit, a few residents chatted in the laundry room while they waited on their clothes, residents popped in and out of the office to talk to the amicable staff person, and a study group met up in the common room. Unwanted items are placed in the “free pile” in the laundry room where people meet and fuel midnight-laundry-conversations with vending machine snacks.
Residences:
A variety of apartment configurations make up the 6 buildings. One of the primary arrangements is illustrated below: 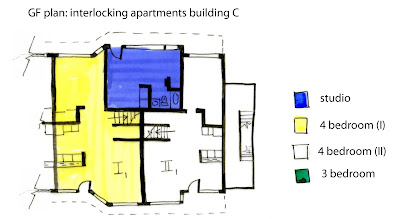 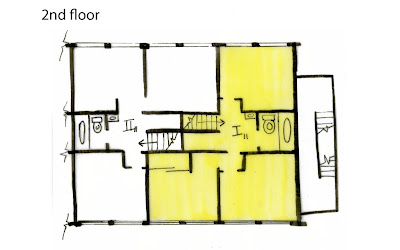 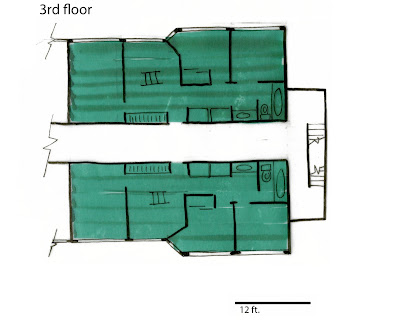 The 4 bedroom apartments (yellow & white) interlock with one another so that the upstairs of one apartment is directly above the neighboring apartment. This diagrammatic section illustrates the arrangement: 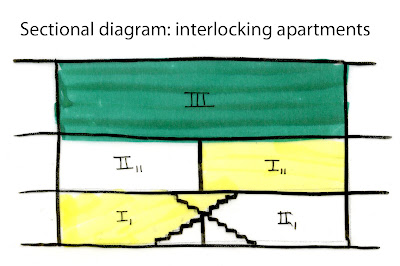 Oscar lived in one of these interlocking apartments and disliked the design because he was kept awake by the noise of his neighbors moving about their daily tasks. The bedrooms of one apartment are above the living room of the neighboring apartment and vice-versa; there is basically no acoustic privacy between neighbors because the walls are very thin. His apartment was equipped with a stovetop, oven, refrigerator, and freezer. The refrigerators are replaced regularly and work well. Oscar would have liked another half-bath downstairs, a bit more space in general, and thicker walls. He suggested they take down the walls between the living areas so neighbors could get to know each other better.
The hallways are dimly lit and often smell strongly of whatever is being cooked in the apartments.
Shared amenities:
Energy/waste:
During the 2010-2011 school year Rochdale used:
Electricity: ~30,000 and 40,000 kWh/month (winter) & slightly less over summer
Natural gas: ~3,900 therms/month (winter) & ~1,000 therms/month (summer)
Water: ~350 CCF/month (winter) & ~625 therms/month (summer)
Oscar estimated ~50% of apartments use the optional recycling/compost bins
Rochdale vs. Fenwick/student co-op houses:
Many students prefer the Rochdale apartments over the neighboring co-operative apartment, Fenwick. Although Fenwick is much newer, the apartments have larger common living areas, the hot tub is usually functioning and clean, it is more expensive.
Oscar told me what he liked about co-operative houses: eventually you run into housemates getting food or going to the bathroom, they are more cooperative, people hang out in the kitchen, and food is shared. He found the co-op apartments to be attractive because people tend to be more on their own, they are considered cleaner, there is no public association with drug use, there is a greater diversity in culture, and there is more time to “chill” alone. He compared the layout to a dorm.
When Oscar was the President of Rochdale, he knew around 20-30% of the residents by name. Most residents on the same floor are usually at least acquainted. Oscar mentioned that there used to be a central kitchen and he would like to see it come back or have at least a couple communal dinners each week. Without a central kitchen, it is easy to go long periods of time without seeing a friend and it takes a bit of effort to be an active member of the community.
Safety:
16 security cameras were installed as a reaction to a sexual assault incident. Occasionally, someone from the street comes into the courtyard and refuses to leave or causes a fight and the UCPD is called. Those looking for cans don’t cause any trouble and the Rochdale staff help them.
Conclusions:
For most residents, the Rochdale Village co-operative apartment functions like any other apartment complex. The key points of distinction are the laundry room, the office, and the common room where residents have the opportunity to get to know another. Some become involved in the biweekly meetings and social events, but the large majority come and go with a high level of anonymity, passing each other in the courtyard space as strangers. Many co-opers come to Rochdale to “retire” when they want more time on their own and the anonymity works for them.
Acoustic privacy is, in fact, the primary concern of residents. Those living in the interlocking apartments broadcast their every movement through the thin walls and into the ears of their neighbors. Oscar’s idea to take down the walls between the two living rooms of the apartments is interesting because it would give the residents more opportunity to communicate about when they need quiet to sleep or study.
“The flats” and “the heights” are valuable spaces for hosting parties. They are easy to find and open out to the backyard space. The low walls around the entrances provide subtle boundaries that serve as places to lean and converse when the weather is fair.
259 people is a very large co-op. In cohousing, the Danes never built a community for more than 50 adults4. Through trial and error, they discovered that 20-50 people is optimum. 259 people may be too many people for a single tight knit co-operative community. A single centralized kitchen and/or shared meals may not be an effective community building strategy for Rochdale. Perhaps several (5-13) larger kitchens throughout the complex would be a more effective design: providing the opportunity for residents to get to know one another a bit better and moving some of the noise out of the individual apartments where people sleep and study. Perhaps residents would be less worried about cooking aromas in the hallways if they could take part in the making and eating of a shared meal.
1”Berkeley Student Cooperative.” Wikipedia, The Free Encyclopedia. Wikimedia Foundations, Inc.. 18 Jan 2012. Web. 30 Jan 2012.
2”Rochdale Principles.” Wikipedia, The Free Encyclopedia. Wikimedia Foundations, Inc.. 28 Jan 2012. Web. 30 Jan 2012.
3”History of the BSC.” Berkeley Student Cooperative. 30 Jan 2012.
4McCamant, Kathryn and Charles Durrett. Creating Cohousing: Building Sustainable Communities. New Society Publishers, 2011.
Posted by Sarah Brady at 1:59 PM