Greetings! My name is Elan and I'm the newest contributor here on "It's a Co-op!" Our name reminds me of the fictional radio show "It's a Wise Child" in J.D. Salinger's stories about the precocious Glass children. Hopefully our blog will provide the kind of piercing insight that would make Franny and Zooey proud... Anyway, I bring you my first post and believe it to be a goodie. Last weekend I had the privilege of attending the National Cohousing Conference which was held at Oakland's Marriott Hotel, the first time the annual conference has been in the Yay Area since 2001.

Seeing as this is a cohousing post within a co-op blog, I'll clarify the distinction between the two before I go any further. Our friendly and familiar co-op is a more general term which technically refers to a specific type of legal ownership, but is loosely used to refer to many types of communal living arrangements--often those in which members share all of their food. Cohousing, although occasionally run legally by the definition of a co-op, refers more to a way of life. This way of life is characterized by multiple units which are individually owned or rented (often by families) which together form their own intimate neighborhood, replete with common house, chore contributions, and communal dinners a few nights per week. Cohousing communities vary widely in the number of individual units (and therefore people), ranging from just a few to over a hundred! Most of the cohousing communities I looked at in the East Bay had a dozen or so, and therefore averaged 20-30 people in their community.

Onwards and upwards! The best part of the conference (besides an endless supply of free Marriott pens) was a full-day bus tour of cohousing communities in Oakland and Berkeley. As one man on the tour said "Seeing is believing." I must agree--there's no better way to learn about the wonders of cohousing than visiting the places themselves. That said, I'll do my darndest to give you an impression of what they're like in words and pictures.

Up first was "Berkeley Cohousing," which is technically unnamed and has therefore assumed the name of the town it resides in by default, which originally got its name from George Berkeley, an 18th century philosopher best known for his work on "immaterialism," the notion that nothing exists without being perceived, and since a community must have a name to be perceived (work with me), is a fitting title for an unnamed community. Regardless, I have photographic evidence of this community's existence: 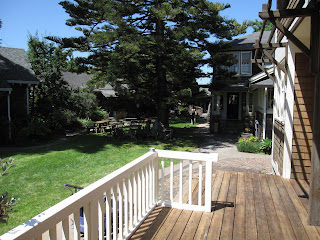 The site for Berkeley Cohousing, at Sacramento and Allston, was purchased in 1994 and subsequently underwent a three year period of development in which a few new units were added, a fence was knocked down, and much renovation was performed on the pre-existing 12 units to create what I considered to be the most aesthetically pleasing cohousing community I visited. Here are Berkeley Cohousing's bare-boned numbers: 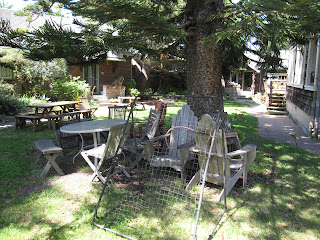 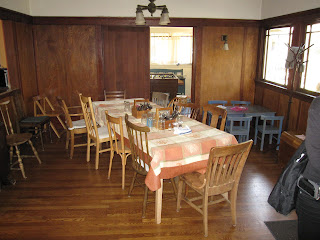 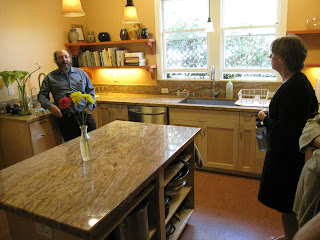 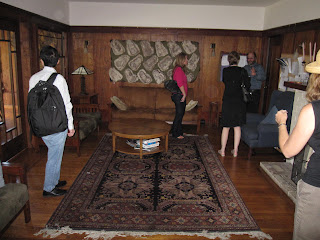 The common house living room (featuring people on a tour). 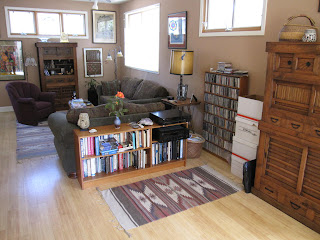