Article in the Sunday, 11/12 New York Times talks about how empty houses in the Central Valley city of Merced, California have become popular as ad-hoc student co-ops.

The types of houses being shared are of the McMansion type - suburban houses with 4-5 bedrooms.  Rent is around $1,000 a month, or $200 a person.  The oversupply of housing and high unemployment in the area has led to these unusually low rates - in contrast, a shared house in Berkeley, which has more jobs than housing, costs about $600-700 a room.  As the houses are all new, maintenance costs are minimal as well and amenities are very nice.  Parking is a bit of an issue as these suburban houses are not within walking distance from campus and Merced is a car-centered city, but with a typical 5 bedroom house, the multi-car garage, driveway, and curb in front of the house is more than enough space to accommodate 5 vehicles.

Strange thing is that UC run dorms cost roughly the same in Merced and Berkeley - roughly $1300 a month per person.  Could Merced be the start of a new co-op movement?  I'm already writing to NASCO, the nationwide association of co-ops, on feasibility of organizing something.
Posted by alfred at 9:28 AM 2 comments:

I arrived at the Domes Community Build Friday night just as twilight set in. A few of the Domes were lit from the interior; the drone of hand-held drills found its way out into the cold air. The central open space was occupied by several drummers. Inside the yurt, boxes of fresh Asian pears and apples accompanied the remaining scraps from the communal dinner.

When I returned the following day, I received a nametag, a warm breakfast, and a garden assignment. We excavated the thicket of bermuda grass entangling some sage, comfrey, and a patch of lamb’s ear. Turning the soil, we uncovered some river bed rocks to place around the bed. My companion, Stepan from the Czech Republic, overheard the woman in the patch next to ours speaking Czech and struck up conversation. A few patches over, a young woman told her fellow gardener about her positive experience in the new Davis co-op, Cornucopia. A woman named Leslie answered our questions and ran around adding water to the soil to soften it and choreographing the labor. A tractor showed up around lunchtime and turned out the weeds at ten times the pace of the rest of us.

After lunch we held a meeting and divided up into different labor forces. There were upwards of ten skilled carpenters. I joined a crew of landscapers. We hacked away at a thicket of bamboo that sheltered the outermost dome from the eyes of passer-bys. This dome was now the office with an ADA accessible ramp drying in the sunshine. Soon, I made my way over to the sanding station and spent the rest of the day-lit hours smoothing over the faces of two-by-fours for the loft railings. After sunset, I threw a few shovelfuls of dirt on a path to smooth it out in preparation for a layer of concrete. 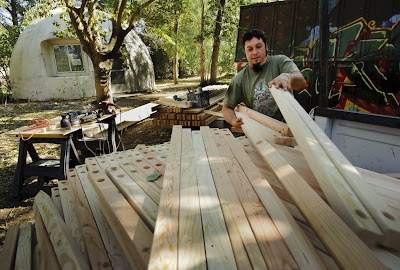 When the Mad Cow String Band played in the yurt, the big group of us took turns eating and dancing. A few local musicians played next, followed by a reggae band from Santa Cruz.

The next day followed the same pattern. Photographers and reporters made their way around. A cleaning crew was formed and a mosaic was carefully arranged. I was continually impressed by the organization and the productivity. The garden was hardly recognizable when I went to spread wood chips on the path. There was probably 100 volunteers working through the middle of the day and when it started to sprinkle, the tools were gathered under a tarp and shelters were propped. Most of the volunteers were past residents or residents of other Davis co-ops. Seventeen Berkeley co-opers joined the Domes Community Build—the largest out-of-town contingent.

Some “ex-domies” (past residents of the Domes) silk screened shirts to read “We Saved the Domes,” and crossed their fingers that it would indeed be true. According to an article in Davis Voice, the UC Davis student housing department is considering making an agreement to allow the Domes to remain for five years under third-party management. See the following articles for more on this story:

McCollough, Laura. The Saving of the Domes at Baggins End. Davis Voice. 2 November 2011.

When I visited Bonewall on a weekday morning, a man with a cart of plastic garbage bags was pulling cans out of the recycling. Inside, Peter and a few housemates were taking inventory of the food supply. The house was quiet, sunny, and relaxed. I had visited the house once before in the spring when a band of student co-opers was playing in the living room and the place was brimming with commotion. Both times I found myself on a kitchen stool that is central, but not in the way of circulation. A box next to the trash was filled with Cliff bar wrappers, the neighborhood cat wandered around the backyard, and a co-oper offered some teriyaki-basil-hummus.

The nine original residents all previously lived on the northside of the UC Berkeley campus in the Berkeley Student Co-ops: Six from Kingman and three from Cloyne. In the fall of 2010, they decided to move into a house on the Southside of campus and start a small-scale co-op. The house is around 100 years old.

Bonewall is located a few blocks away from an access point to the “firetrail” that brings hikers and runners up through the Berkeley hills. The neighborhood is a mix of students and families. The Bonewall residents co-exist peaceably with the neighbors despite the fact that they are in a significantly different stage of life. The Clark Kerr dorm is a few blocks northwest and the Claremont hotel is a few blocks south. Claremont street south of Bonewall has a fairly constant flow of traffic. 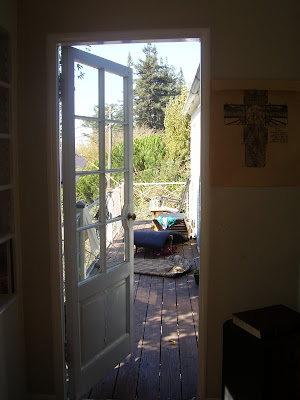 The back courtyard space is very shady and therefore not put to much use. For a period of time, a woman they met through craigslist lived in a tent in the backyard. There is a small stage and a barbeque. Uphill from the back courtyard, the terrain becomes very steep. It is overgrown and filled with spider webs, but has been a space used for meditation. The sunny porch on the south-side of the house has become the primary outdoor space (see photo). They go up on the roof a couple times a month. 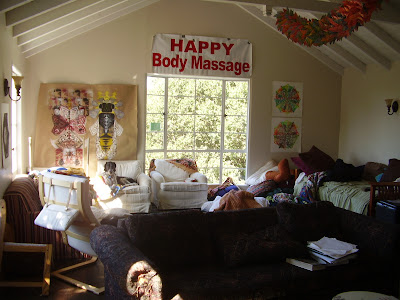 The main common space on the ground floor is a large living room (see below) with three sets of French doors that open onto a 5-ft porch. Opposite the doors is a fireplace. A guest bed and a variety of couches occupy the space. A movie projector faces a whitewall. There is a sense that this space was designed to be the showcase room of the house. Adjacent to the main room is the library (Peter suggested it doesn’t get much use) and adjacent to the library is the dining room. Every other Sunday the house members meet in the dining room or in the main common room on pillows. They also have a tradition called “Waffle Wednesdays” where the house and friends of the house gather for a meal. There is visual access between the dining area, the stovetop area of the kitchen, and the French doors to the back courtyard. 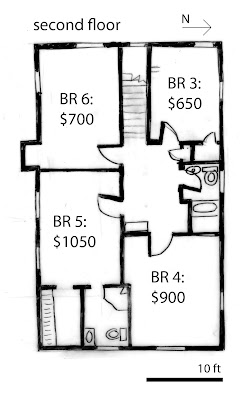 The staircase to the second floor is across from the front door allowing access from the front door to personal bedrooms without passing through the kitchen or the main common space. There are four bedrooms upstairs. The southeast bedroom (BR 5) with a personal bathroom is a co-ed double. Two of the singles are occupied by friends that grew up in the same house. There is also extra storage space upstairs. Peter said there is a ridiculous amount of storage space in the house and they offer it to friends sometimes. 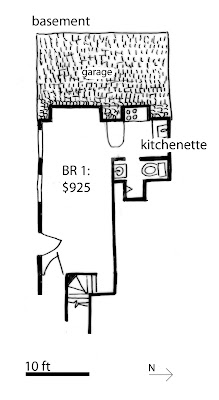 The basement is designed to be an in-law suite with a kitchenette, a mini-shower, a separate entrance, and an independent heating system. At first they could see their breath and they put on 2 layers of sweats. They still don’t use the heat very much, especially during the day. They rarely use the kitchen facilities, bathroom, or separate entrance. They use the extra space for storage primarily. Past residents experienced break-ins to the basement.

Peter mentioned that there are currently 5 girls and 4 boys living at Bonewall, a gender ratio that they take with some seriousness. There is also a dog that is under the care of one of the housemates. They had a dog under collective care at one point but now think it is better if one person is the primary caretaker for a house pet.

Peter said he would change the layout of the basement if possible: the lack of air circulation and light and the constant population of rats makes this space less habitable than the upstairs bedrooms. The kitchenette and bathroom are unnecessary because the residents prefer to use the common facilities.

The common spaces in the house appear to work well for this co-op. The use of the porch is encouraged by both its orientation and its adjacency to the main common space. The kitchen stools next the stovetop offer a comfortable central location where friends and housemates can interact with people while they spend time in the kitchen (see below). 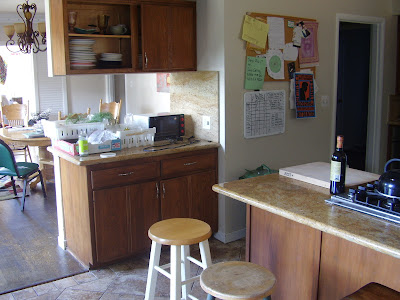 It was especially interesting that the woman who “tented” in the backyard didn’t become close with the rest of the house. Although Peter and his housemates attributed the lack of connection to personality differences, the fact that she occupied a separate structure of a lower level of comfort is significant.