Save the Domes! the book is now available!

The UC Davis Domes, also known as Baggins End, are a community of 26 UCD students living in a village of 14 fiberglass domes.  Two people live in each dome.  Although each dome has its own kitchen and bathroom, the Domies share meals together a few times a week.  It is a great example of a student cohousing community in a low density setting.

"Save the Domes!" follows the story of how the Domes almost got shut down in 2011, how the Domies rallied the greater community of co-opers and cohousers to lobby for saving the Domes; and organized hundreds of people to make repairs and renovations.  Also inside are photos of life at the domes and information on how the domes are run.

You can read the story online, download a free PDF of the story, photos, and other info, or order a hard copy from Amazon.

Here's some pages from "Save the Domes": 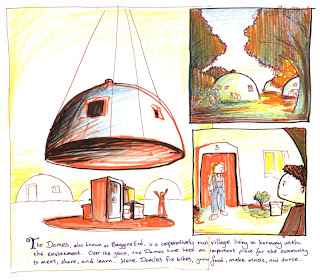 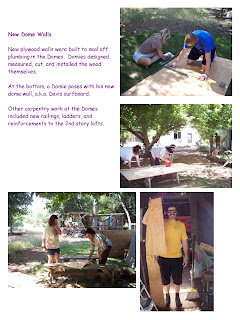 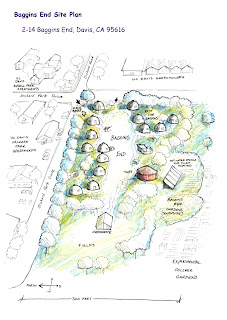 Again, greetings! We pick this post up right where we left off last time, namely my recent East Bay cohousing bus tour. Following our brief sojourn at Berkeley Cohousing, we continued to North Oakland to visit Temescal Creek Cohousing, a prime example of what has been termed "retrofit cohousing." Retrofit cohousing is just a cohousing community that bought pre-existing homes that were next to each other, knocked down a fence or two and voila!! a cohousing community. Here's a picture of Temescal Creek's gate: 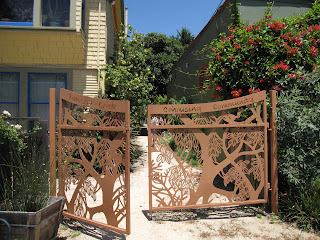 Pretty, right? Temescal Creek was started in 1999, when five families came together around the site. Since then a common house has been built and four units added. The common house: 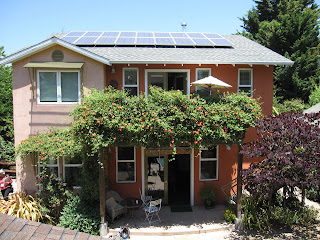 My understanding of the story behind the common house is that each family in the community pitched in 20k and the finished upstairs unit was sold to finance construction. It includes a kitchen, dining room, bathroom and laundry area.


Temescal Creek has plenty of outdoor space for its six kids and four teens to roam around freely. Here are a couple pictures:

Retrofit cohousing is much cheaper than starting from scratch, just as using leftovers is cheaper than making a new meal. But the result, with a little work, is just as delicious! It's also a more viable option in high population density areas such as the Bay Area, since untouched plots of land are uncommon.

Here is Temescal Creek by the numbers:
Site: 1 acre located at 328 45th St, Oakland CA. Right across the street from Oakland Tech High School.
Units: 11 (four duplexes and three single family houses)
Price Range: Units now worth $350-$600k. Originally they were worth $117-$300k.
Residents: There are 30 residents (20 Adults, 6 kids, 4 teens), including two renters.
Governance: Two committees and the rest of the decisions are made by the whole group. Fallback 80% majority.
Meetings: Once a month.
Dinners: Twice a week.
Features: Solar powered hot tub! Also solar panels on roof of the common house and one of the units. Basketball hoop, swing, chickens, rabbits, and kale.


One of my favorite things about Temescal Creek is the number of kids and teenagers who live here. After defeating one of the teens decisively in a game of ping-pong, I asked him what he thought of growing up in a cohousing community. Though stereotypically monosyllabic, he effectively said that it was great, and his friends love coming over because of all the space. Not to mention the solar-powered hot tub! 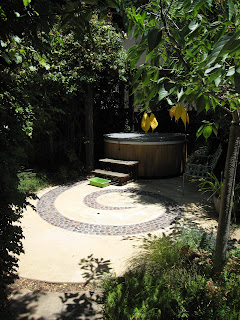 Mariposa Grove Cohousing
Leaving Temescal Creek, we found ourselves headed north to Emeryville and its Mariposa Grove, presumably named after the grove of giant sequoia trees in the southwest corner of Yosemite. While there exist no sequoias in Emeryville, this Mariposa Grove did have an awesome willow providing shade for a self-built outdoor stage in the middle of the community. A photograph: 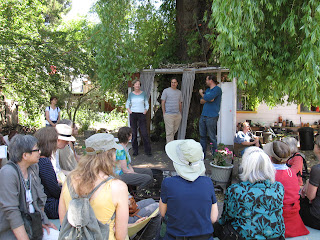 By the way, if you've never visited a sequoia grove, you really should stop reading about cohousing and drive out to the Sierras. They are, without question, one of the most spectacular things I've ever been in the presence of. I could rave endlessly about their majesty, golden bark, unparalleled girth and the feeling of being on another planet when next to them. But I won't.

Anywho, there exists a chicken co-op (wordplay alert!) at Mariposa Grove which produces eggs for the community (as chicken co-ops at other cohousing communities and for that matter, all over the world do).

Mariposa Grove is another great example of retrofit cohousing. They started in 1998, with the purchase of three dilapidated buildings and have grown to comprise six condo units, a common house, and a rental house. They also have a nice outdoor space in the middle of the houses where they grow a bunch of vegetables and enjoy sun time.

Here is Mariposa Grove by the numbers:
Site: 1/4 acre located at 828 59th Street Emeryville, Ca.
More History: Redeveloped by Northern California Land Trust (NCLT) as a Limited Equity Low Income Cohousing, meaning that 70 percent of the member households must have an adjusted gross annual income less than 80 percent of Oakland Metro's median based on household size. NCLT aids low income owners to receive deferred payment low-interest loans and grants.
Units: 6 condos, a common house, and a rental house which is currently being renovated into a three-plex with a shared unit, a single family residence and an office space.
Price: In 2008 condo units sold for between $250k and $320k ($50-$100k after subsidies). Rental house is $2100/month divided amongst four adults.
Residents: 18 (14 adults, 4 kids), including four renters.
Governance: As part of a land trust, Mariposa Grove is part of a homeowners association which uses a 2/3rd majority rule. At the community level, they use consensus (minus one vote), and multiple sub-committees and working groups are empowered by the Management Committee.
Meetings: The community meets twice a month and also participates in quarterly homeowners association meetings. There are also twice quarterly work parties for property maintenance and improvement.
Features: Greywater, permaculture, chicken co-op, kids' playroom, other great things.

One of my favorite things that Mariposa Grove had was a big corkboard full of photos of the community members in the common house. Here's a photo of the photos:


Here are some other pix:


And so dear friends, I am saddened to inform that here ends another magical virtual cohousing tour. I too regret our departure, but never fear! Cooperative living is closer at hand in the real world than we oft realize. Let these words and pictures serve as an inspiration to those of us still confined to single-family households, awaiting the day when we too break free and can finally rejoice in the communal hymn, our voices loud and strong, resounding at once in collective harmony!

Until then, keep checkin' back here at "It's a Co-op!", your source for anything and everything co-operawesome!
Posted by Elan at 10:34 PM 1 comment: