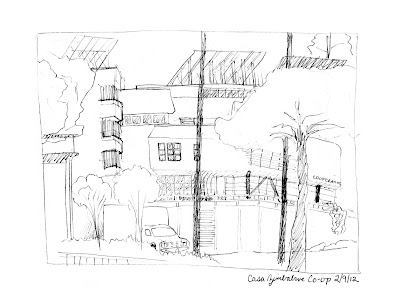 The first time I set foot in Casa Zimbabwe, CZ, I was a freshman at UC Berkeley living in the dorms. There was a couch up on a table in the main dining room occupied by two students in a very vocal, flagrant philosophical debate. The kitchen was overflowing with co-opers cutting garlic and talking loudly over the sound of the rock-music. The room we visited had bits of broken cds glued to the walls and a black light. When I moved in a few years later, I got a better look at the murals covering the walls. I slowly got used to the dinner ritual: big pots of food are placed on the central tables and about eighty people crowd around the dishes and elbow their way to the serving spoon. I was spending late nights studying on campus and would come home at 3 am on a Friday night to find a jazz band playing and thirty people dancing the night away. Some people say living in CZ is like living in a night club. While living there, I never found the perfect spot to do yoga and only made about five friends that I am still in contact with. My informant, Hamutahl, had a very different experience.
History:
CZ is the first co-op that was built to be a co-op. It opened in 1966. At the time it was called the “Ridge Project” because it was built on the plot of a co-op named “Ridge”. It was one of the first co-ed student housing options in Berkeley—the men occupied the 10’s wings and the women occupied the 100s wing along with the house mom (room 99). The two wings were offset half a level from one another to make it less dorm-like.
A summary of changes made to the house:
Overview: 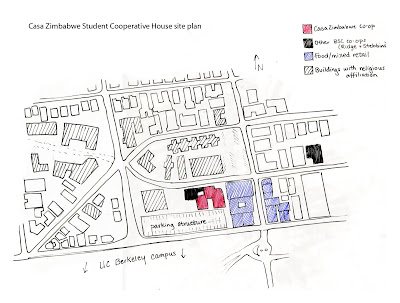 CZ is just north of the UC Berkeley campus next to a small hub of shops and restaurants that serve the campus community. Up the hill to the West is a five way intersection with a church on every corner. The czars call this the “Holy hill”. There is also a church directly across the street. 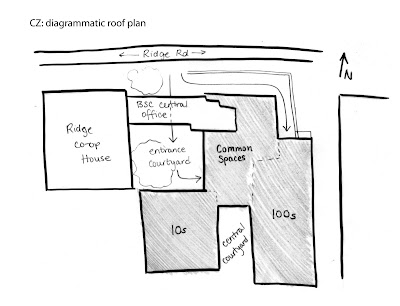 Just within CZ’s entry gate is a courtyard with a few painted gargoyle planters and several very full bike racks. This area gets very little direct light. The central courtyard, on the other hand, gets several hours of midday sunshine. The picture below was taken on an overcast February day around 3 pm. 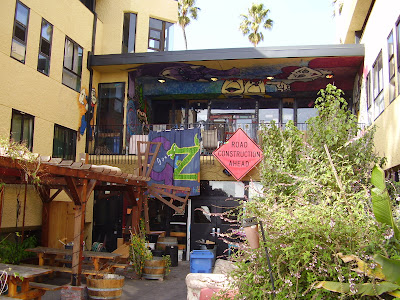 The sectional diagram above gives the sun's approximate orientation during the hours just before noon.  The courtyard and common spaces beyond get a good amount of direct sunlight during the middle of the day.   The courtyard is only used occasionally for a special event that requires some open air (i.e. a BBQ or a fire-dancing performance). The planters are overgrown and, during my time on garden crew, contained bits of broken glass and beer cans. The gazebo stands above several picnic tables allowing czars to climb from the courtyard to some of the bedrooms in the 20s floor. There is a hot tub in the courtyard. Around the corner from the courtyard is the rose garden (see photo below)—an out of the way nook where several rose plants have been thriving. It is easy to live in CZ and never notice this corner. A few past residents I spoke with confessed that the rose garden was one of their favorite places. The bee boxes are called “the home of unwanted bees” to echo the mural in the main entrance hall that reads: “the home of unwanted children”. 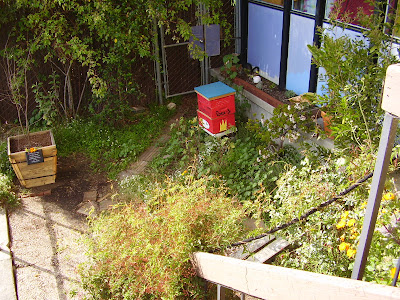 The two roofs get full sun and a good amount of use. The 100s wing roof (see photo below) is also home to the study room. Ambitious garden crews usually grow some food in the planters: currently there are some celery plants and leafy greens—probably enough for 2-3 big vegetable dishes for the 124 residents. While less than 1% of the house food is homegrown, the bee hive produced 5-6 gallons of honey in a year. 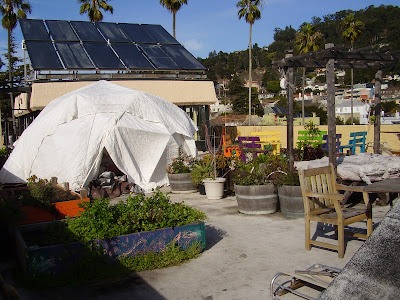 The 10s wing roof is home to the enclosed bar room (see photo below), unused furniture, a bit of gardening equipment, and an array of solar panels. 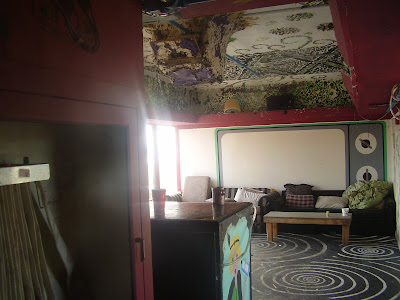 Common Space:
Two primary common spaces connect the two wings. The upstairs common room is a dining room with a sound system, a balcony, a wooden floor, and access to the kitchen. I visited the dining room twice in less than a week and the dining furniture had been rearranged so take the positioning of tables and couches with a grain of salt. 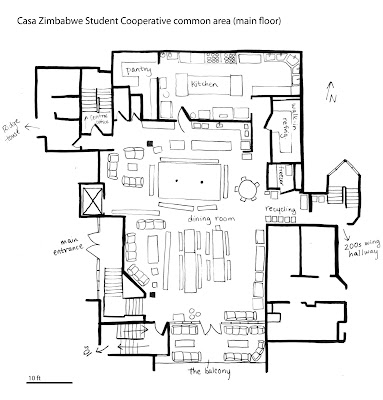 Hamutahl said the dining room is a place to sit with friends. She said it is very social and you can see everything all the time. This space hosts dinner, council, and most parties. It is a great place for parties because there are no hidden nooks for someone to pass out unnoticed. 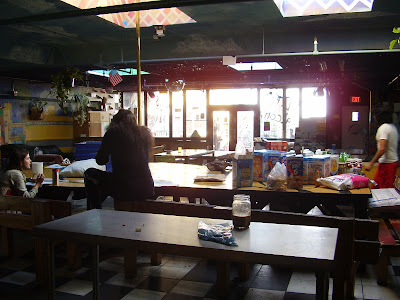 The balcony overlooks the courtyard and the interior walls of both wings and gets full sun through the middle of the day. The view beyond the courtyard is of a parking lot and the edge of the UC Berkeley campus. Hamutahl said the balcony holds an interesting place in CZ history. It is a place known for smoking, partying, fires, interruptive conversation during council, graffiti, and Alice in Wonderland murals. It is a place where some people spend most of their time and some people rarely set foot. 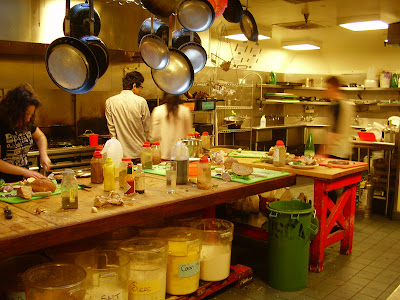 The kitchen is vibrant, hectic, and a great place to rub elbows with unfamiliar housemates. People in the common room can’t see or interact with people in the kitchen and at dinner time there are traffic jams in the two doorways leading into the kitchen. Czars doing dishes and pots face a blank wall with their backs to the main kitchen area. The pantry is small and dark and one czar named it the “torture chamber”. The skylights and the small window in the door are the only sources of natural light in the kitchen
The downstairs common space is called the “Red room” (the walls are painted red). There is a fireplace, a wheelchair access ramp, a piano, a pool table, an out-of-order bathroom, and at least a couch or two. Before the 2006 renovation, there was a space called “The Den of Iniquity”, filled with curtains, cushions, and a record player.
The hallways, bathrooms, and stairwells act as informal, out-of-the-way common spaces to a minor extent. I remember having a few short interactions with housemates in these in-between spaces, but always had the sense that everyone in the hallway is listening in on the conversation.
The 100s wing: 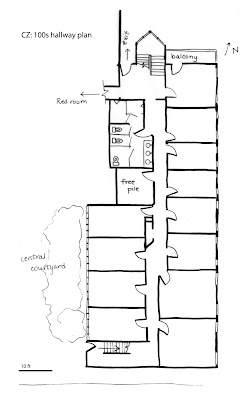 The 100s wing consists of three stacked double-loaded corridors with a bathroom on each floor. There is an extra stairwell at the far end of the wing that is mainly used for making phone calls or throwing an old mattress. This was originally the female wing and the straight hallways made it easy for the house mom to watch the traffic to and from the rooms. The 200s bathroom has a high level of traffic because it is on the same floor as the main common room and kitchen and because it has the laundry room.
The 10s wings: 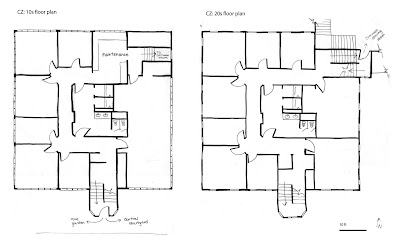 This layout of the 10s floors is c-shaped with the bathroom in the center. This was the male wing originally. Hamutahl lived on the 10s floor her first semester and called it the “most social floor ever”. There were only 9 people living on the floor and they would all hang out on the ground in the hallway. The fact that they all applied to be managers the following semester suggests to me that they all became very invested in the community due to their experience together in that tiny 10s floor. There are 4 total floors in the 10s wing; the 10s floor has seven rooms and the 20s, 30s, and 40s have 9 rooms each.


Shared amenities:
Heat:
The 10s floor sits into the ground a bit on the south side and can get pretty cold. Every room has a personal heater that plugs into a central heating system. The kitchen can get really cold—especially when skylights are left open
Privacy:
The rooftops and the rose garden are the only common places in the co-op that offer opportunities for privacy. The courtyard is not a private space because the common space windows and room window look out to it. Noise from the balcony is a constant problem for people with courtyard windows.  Courtyard and balcony shown below (outdoor couches proliferate). 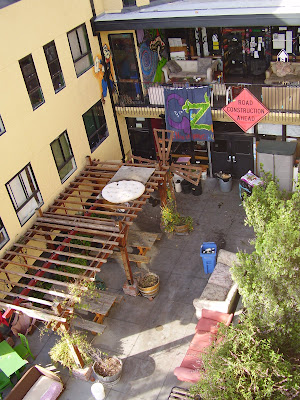 The walls between rooms are very thin so residents can easily hear one another. They held Womens’ Meetings at CZ in individual rooms because there was no common space with enough privacy to set the right atmosphere.
Regular layout:
Hamutahl suggested that the regular layout of the rooms may actually increase the chaotic quality of the house. She lived in another co-op, Lothlorien, where the rooms are much more irregular and found the atmosphere to actually be much calmer. In fact, it was only where the regular layout of CZ breaks, on the smaller 10s floor, that she found friendship and community.
Conclusions:
The central courtyard in CZ is not effective at creating a strong community. The privacy of the people with courtyard windows is at jeopardy when the courtyard is in use, and the privacy of the courtyard space is jeopardized by the surrounding windows. The adjacent common space is the red room which is commonly unoccupied. The overhanging balcony is almost always occupied but the socializing rarely makes it all the way down the stairs and into the courtyard.
The lack of smaller, more private common spaces means there are fewer places for conversation.
The long straight hallways in the 100s wing are less effective at creating friendship between floor mates than the C-shaped layout of the 10s wing.
The lack of visual access to the kitchen leads to traffic jams around dinner time and prevents the atmosphere of informal interaction from spilling out into the main common space. There are no windows to the outside and the pot-washing sink, in particular, feels closed off from the outside world. The kitchen facility itself, with the large central island and massive stove top, promotes a lively cooperative spirit.
Despite the shortcomings CZ’s layout, it maintains its sense of humor. While this house may not actually be a “home” for most people who live there, it serves a purpose within the Berkeley Student Cooperative system. The large common spaces and lack of privacy mean great parties. The rooftops are treasured landscapes, places to ponder the chaos below.
Article of interest:
Gross, Rachel. "Keeping Housemates Fed and Green at a Berkeley Student Co-op". The New York Times. 22 February 2010<bayarea.blogs.nytimes.com/2010/02/22/keeping-housemates-fed-and-green-at-a-berkeley-student-co-op/>
Bloomekatz, Joshua. "Tours of Homes Focus on Solar Panels". The Daily Californian. 18 October 1999.
Posted by Sarah Brady at 3:30 PM