How not to start a co-op: Gentrification at 1040 Folsom Street

One of the unfortunate side effects of the rising popularity of communal living among middle and upper income people is that certain types of housing, once thought to be gentrification-proof, are now on the front lines.

1040 Folsom Street in San Francisco is one such example.  Former a SRO (single room occupancy) residential hotel, the three story, 10,000 square foot building was gutted by a fire in 2011, displacing 90 residents.  The building, built in 1912, is subject to rent control regulations, which specifies that  displaced residents have the right to re-rent their rooms at the original price after repairs are made.

The building owner instead master-leased the property to The Negev, a property management startup that converted the building into a high-end co-op targeted towards tech workers.  Rent was doubled from $634 to $1250 for a room.  The Negev also reduced the number of rooms to 40, using the additional space for bars, game rooms, theaters, and other recreational facilities.

While The Negev attempted to buy out the former residents, not all of them took the $500 buyout offer.  The Negev proceeded to rent out the entire building anyway.  About a month after the new residents had moved in, some of the old residents noticed, and filed complaints and lawsuits.

At this point, the situation looks bad all around - not only is the building essentially double-booked, but as the number of bedrooms has decreased, even if it were vacated, it would be impossible to rehouse all the old residents.

Broader Implications
While The Negev and other similar tech co-ops have proven that there is a market for this kind of housing, the displacement of low-income residents is a bad way to do it, and likely to lead to a backlash.  Currently, SF has regulations that limit conversion of residential buildings to other uses, I can foresee regulations prohibiting the conversion of bedrooms into non-bedroom space.

McMansions - a potential alternative?
The size of 1040 Folsom is similar to about 2 or 3 McMansions.  These types of buildings are quite common throughout suburbia, and a precedent has been established via Cupertino's Rainbow Mansion, a 5,000 square foot house in Silicon Valley.

The conversion of large houses to communal living is already common in immigrant-heavy neighborhoods of the South Bay (just look for streets where the number of parked cars approximate 5-10 per house).  However, as zoning currently makes this illegal, and immigrants lack political capital, this model has been kept under the radar.  Tech companies, on the other hand, may be more willing and able to take the risks required to disrupt suburbia in a more visible way.
Posted by alfred at 7:02 PM 4 comments:

One of my other projects, the High Speed Rail Board Game

Aside from researching cooperative housing, I've also made a series of rail maps, including the California Rail Map, the Northeast U.S. Rail Map, and the  U.S. High Speed Rail Map.  Based on the latter is the High Speed Rail Game, a fast, fun, and educational game for 2 to 6 players where players act as politicians and make deals to get their voters connected. 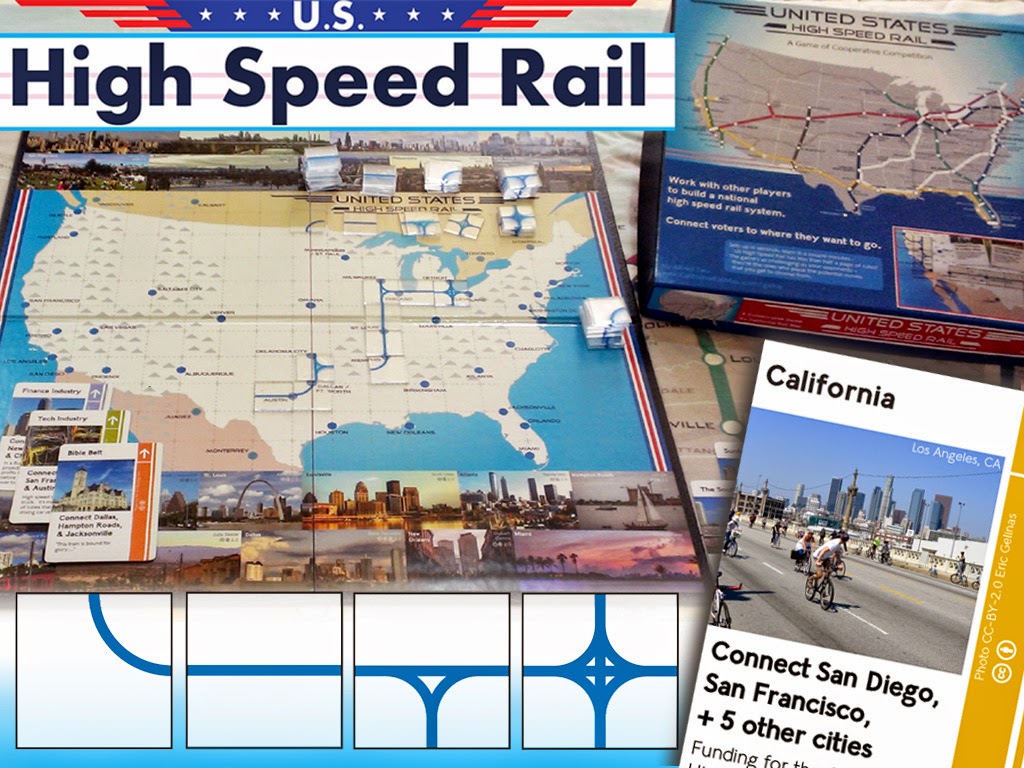 The game's designed to be simple to learn and play, and is fun for both housemates and experienced gamers.
I'm currently fundraising for a first print run on Kickstarter, you can get a hard copy for as low as $15, shipping included within the US.  Details are at https://www.kickstarter.com/projects/1700980409/high-speed-rail-board-game
Posted by alfred at 2:24 PM 4 comments:

34 unit "CoLiving" on Octavia in SF

Rooftop and 5th floor common space
The site presently has a community garden, that will be relocated to the roof.   Just below it on  the 5th floor there will be two common areas (kitchen and dining on one side, living room on the other), each around 700 sf.  This is an unusual location for common space, as residents would not pass by the space on their way home.  However, the choice to locate it at the top floor does ensure more sunlight and closer access to the garden.  It will be interesting to see if residents end up using these 5th floor and roof spaces often, or if they just hang out in cafe and parklet on the ground level.

By the numbers
- The site is 120' long and about 25' deep, for a total area of around 3000 square feet.
- The building appears to have a total of 15,000 square feet.  Of this, roughly 2,000 looks like retail and the other 13,000 residential.
- The 34 units provide a total of 6,510 sf rentable space, which at the developer's estimated rent of $1,350 per unit per month, would bring in around $550,000 of rental income per year. As this is classified as group housing, no below market rate units are required.
- 34 residents makes a good community size, many successful communities are about this large.
- Private space is about 50% of total residential area.
- Bedrooms are about 26% of total residential area.  This is comparable to similarly sized Berkeley student co-ops, however, Build Inc's project has less common rooms and instead opts to provide each bedroom its own bath and kitchen.

Different, but not dramatically more profitable or denser
It appears that CoLiving as designed will have slightly less revenue than a traditional building, though the modular suites (to be built offsite) may bring enough time and cost savings to give it comparable profitability.  The need to provide all those bathrooms and kitchens eats up a lot of space.

What's next?  10-bedroom full floor apartments?
While a departure from the typical apartment building with it's mix of one and two bedrooms, Build Inc's CoLiving fails to realize significant space efficiencies.  Understandably, professionals paying $1,350 a month probably don't want to share bathrooms with 34 people.  However, a smaller community size, of perhaps 10 people, might make it more palatable.

A 10-bedroom apartment could easily fit on this size of site, and would be more efficient than either the CoLiving or a traditional apartment as it would not need as many hallways on each floor.  The popularity of old Victorian houses for group living suggests this could be a future model.

In the 20th century, people who were racist or classist would write zoning laws to keep certain other people from moving into their neighborhood.  Civil rights legislation has struck down most race-based discrimination, at least on paper, though not entirely in practice.  However, zoning codes that mandate minimum lot sizes, maximum densities, or maximum number of occupants continue to exclude people on economic grounds.

Shared housing in theory is a workaround, as a group living together has more buying power.  However, at least in the Bay Area, where even shared housing spots are in short supply, the application and interview process done by existing residents can make it even harder for people who are not of a certain social class or culture to get housing.

Unlike an apartment building manager, who is bound by housing laws that apply when separate apartments or SRO's are leased, someone seeking roommates has much greater discretion to choose who they want to live with - understandably.

Sometimes it's just things such as "Likes quiet" or "No drugs" but occassionally it goes into territory such as "Positively directed" or "World shifters".  Some of the highest profile communities such as The Embassy or the Sandbox House have explicit goals to be not just a place to eat and sleep but also a collaborative space for people to share ideas.

In San Francisco, there are about 2 residents per house or apartment.  Last year, however, the city gained 10,600 residents but only 1,900 apartments.  As most new apartments are 1 or 2 bedroom, most of this increase is being absorbed by people doubling or tripling up.

Will applying for housing eventually be like applying for college?
There is a potential that even as shared housing advocates work to remove exclusionary zoning barriers, they will create new forms of exclusion based on their member application and interview process.  I only know of two cases where there is member intake free of judgement by existing residents.  One is the Berkeley Student Cooperative, which has over 1,200 members in 20 houses averaging 30-60 people in size.  The other was a punk house.

I'm not sure what a solution to this might be, as in a small (under 10 people) community, each person is a critical part.  But maybe this is one of those housing problems that is really part of a bigger societal problem, in this case, a widening gap between social classes.
Posted by alfred at 12:38 AM 3 comments: 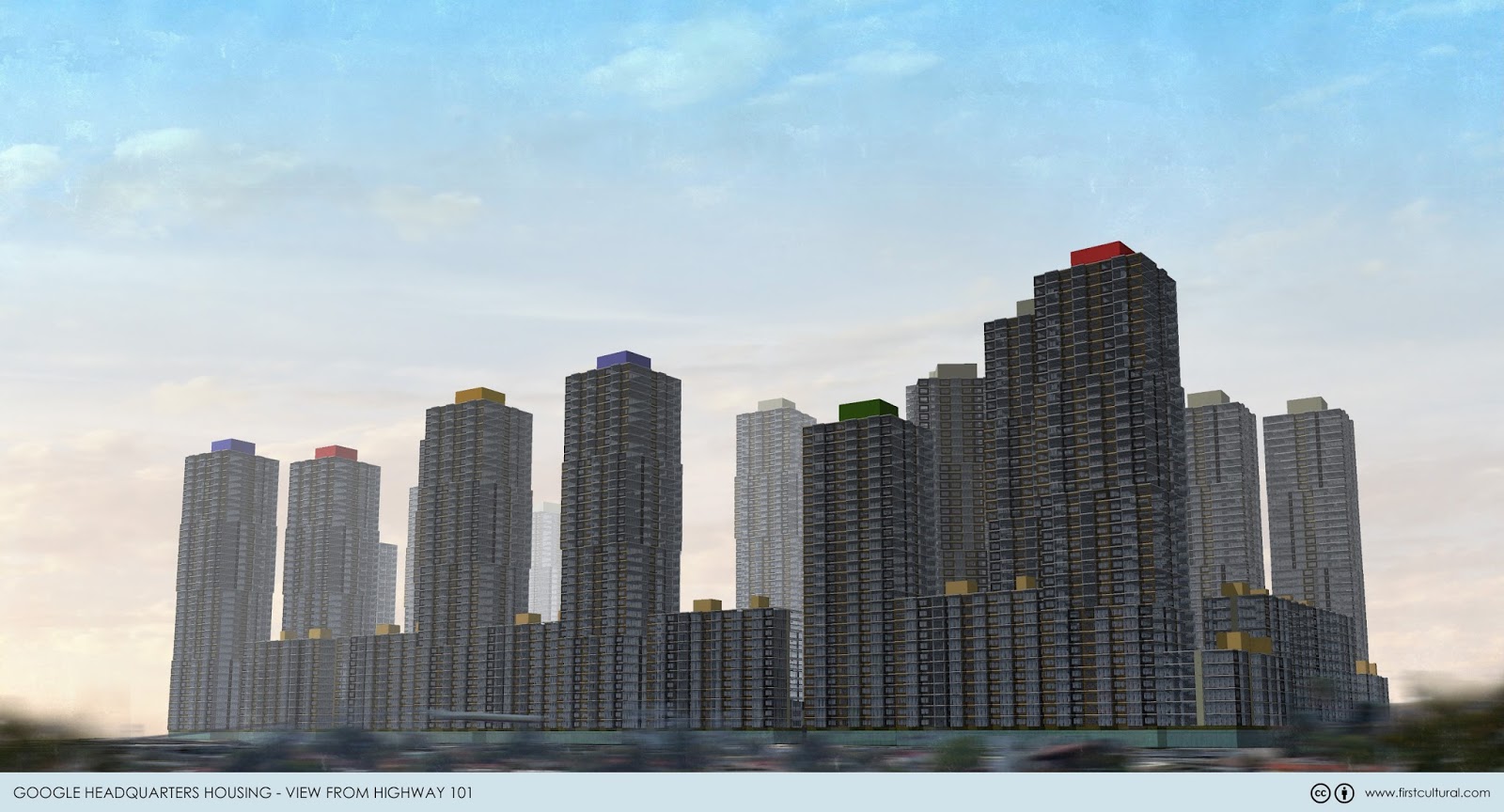 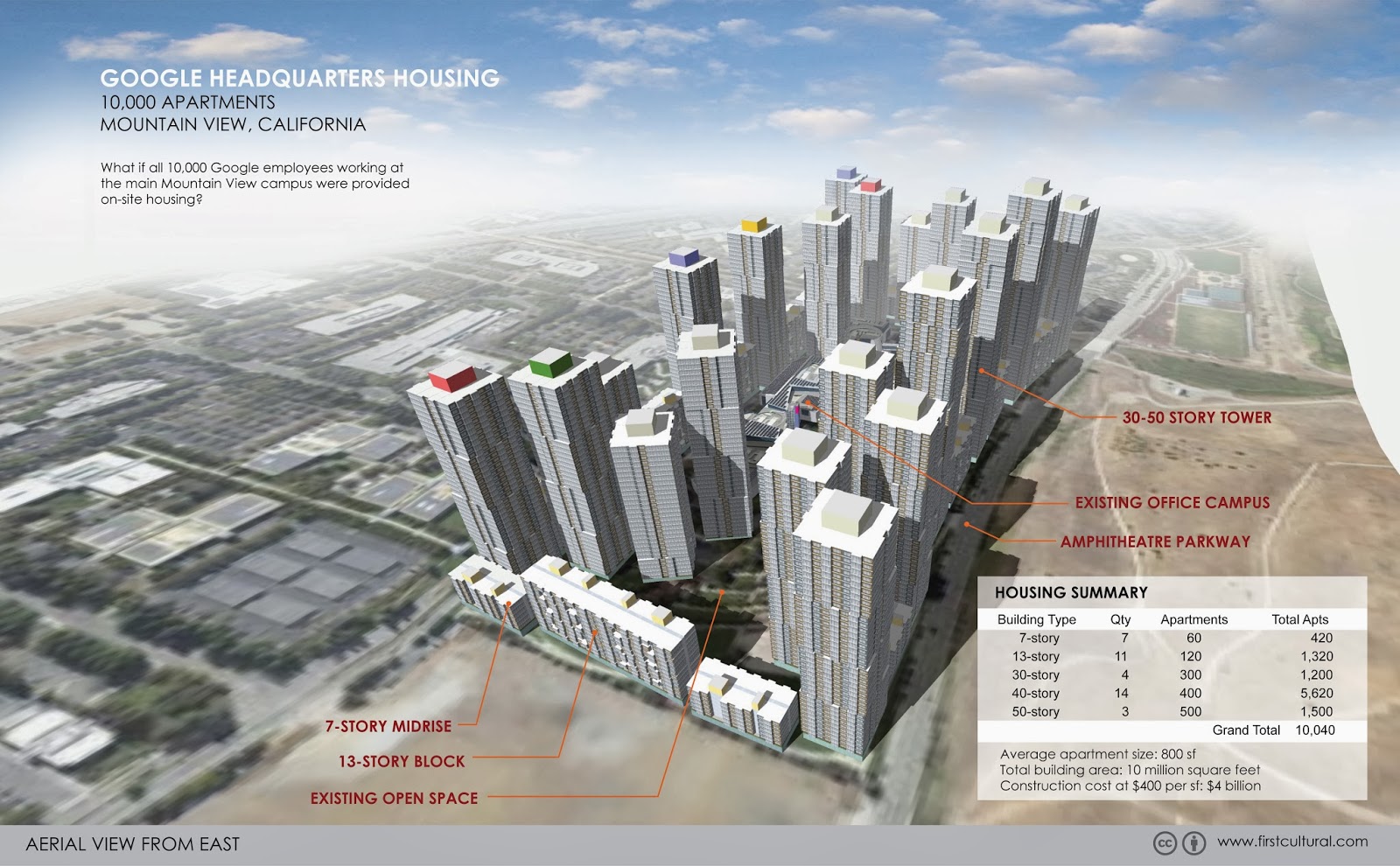 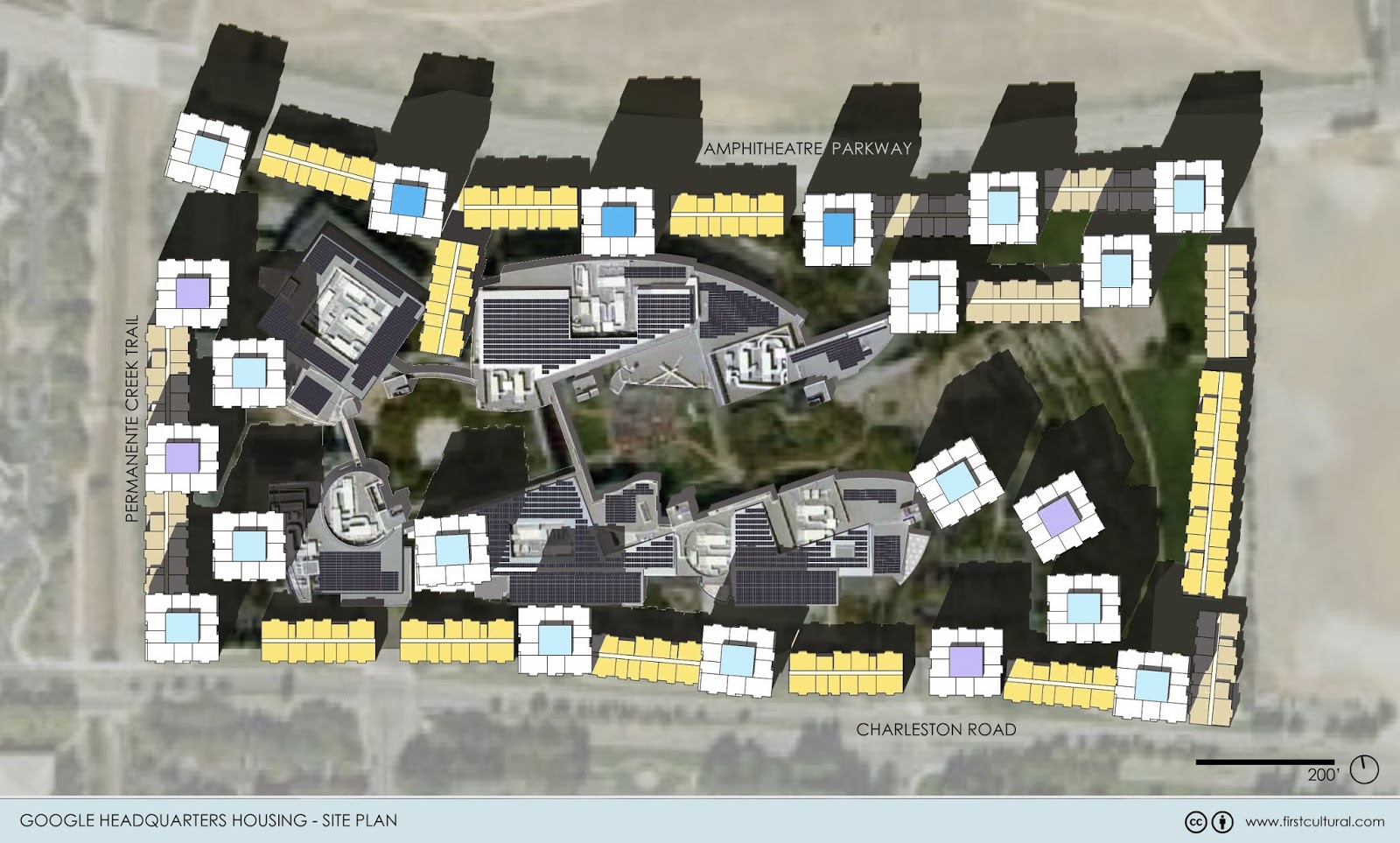