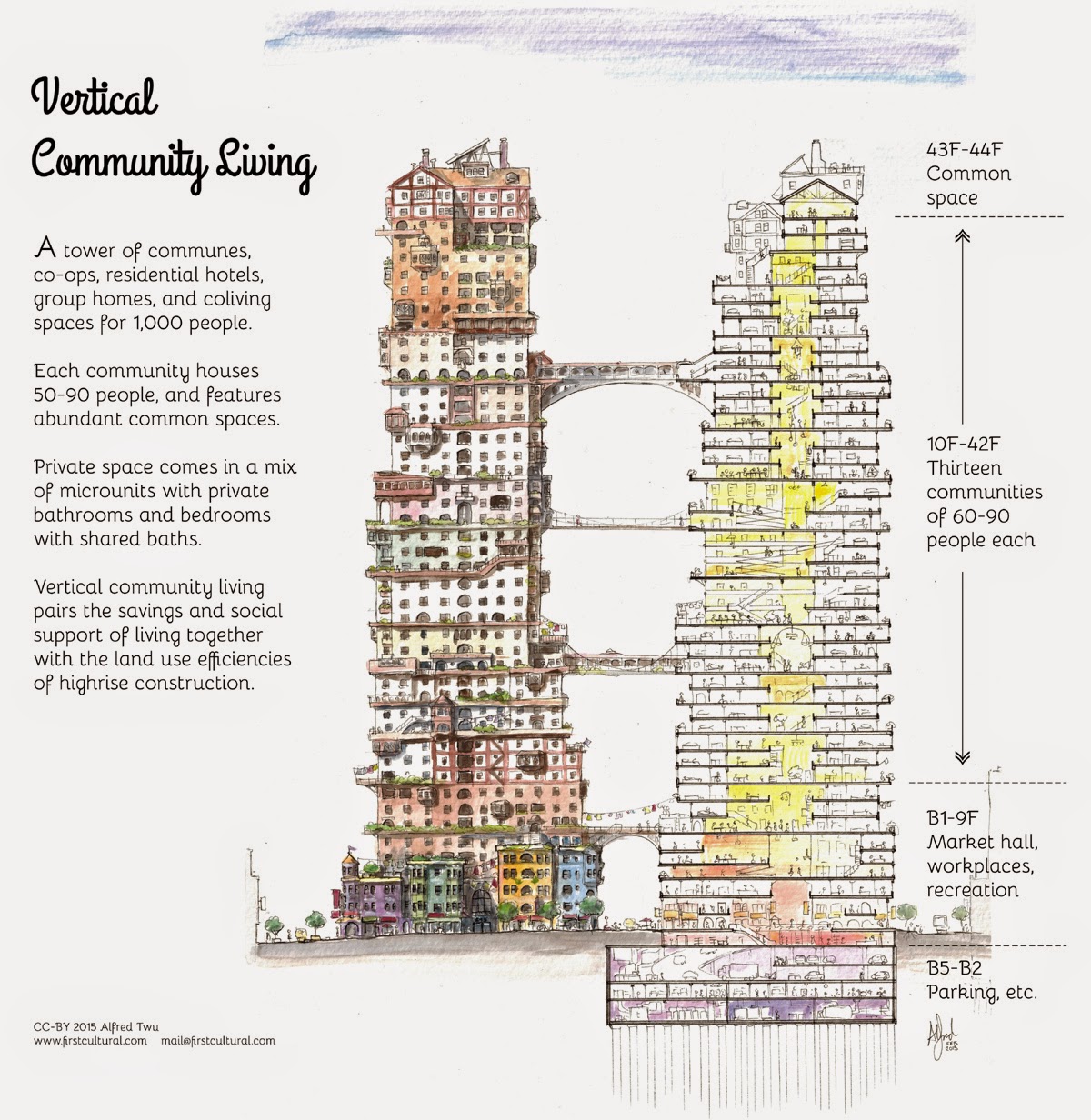 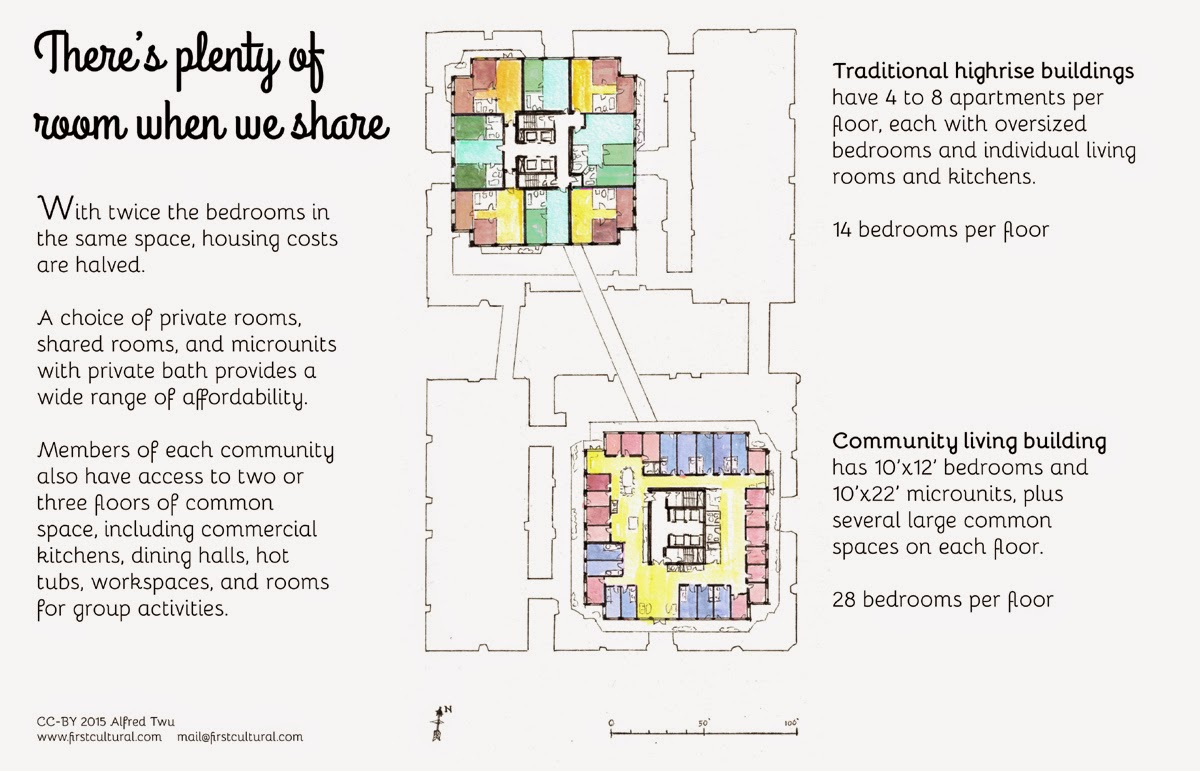 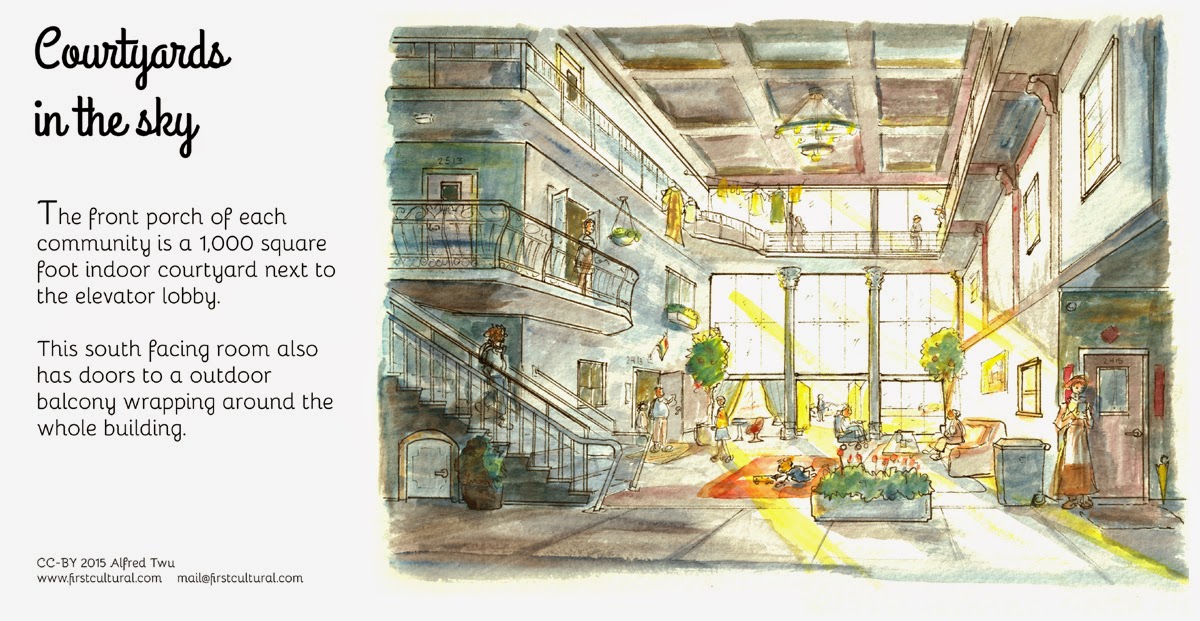 Property management company Campus Coliving master-leases large (most are 5 to 9 bedroom) apartments and houses, and then leases out the rooms individually month-to-month.  What makes them different than a typical manager though is the services they provide, which include:
Campus currently charges $1000-2200 for a private room (all rooms are singles), which is somewhat lower than the going rate for a bedroom in San Francisco.  Their target market is recent college graduates who are relocating to a new city to start their career.

Education and training
To help people new to communal living learn how to do it, they have a Living with Housemates Guide (PDF) that gives suggestions on decision making, chore sharing, food sharing, guest policies, etc.  It feels similar to the Berkeley Student Cooperative's Owners' Manual (PDF), with a few notable differences.
On the operations spectrum, Campus seems to be somewhere between student housing and ad-hoc communal houses started independently - indeed, their prototypical resident is probably between those two types of housing.  Cost-wise, it's slightly cheaper than a regular apartment, somewhat more than a ad-hoc community.  The premium comes from the convenience of being able to meet people when new to the area, the common space furniture, and the short leases.

Any side effects?
This being the Bay Area, there's been concern on the effects this type of housing might have on housing costs for everyone else, though Campus CEO Tom Currier states that no evictions are taking place when he opens the houses.

So who is this type of housing competing against?  Not so much ad hoc communities, who are likely to look for older, cheaper buildings.  Most likely, wealthy couples.  Most families don't have enough people to need 5 or more bedrooms, but there's a certain prestige in having a nice house.  Several working people without children are going to outbid most individuals or couples.

Is senior coliving next?
While right now the main market for this type of housing is people in their 20s, the serviced house model could also be a great way to do senior housing.  Senior cohousing, where residents have individual kitchens and bathrooms, already exists.  Senior shared houses would be lower cost and also lower the cost of home health care.  The UK is ahead of us on this one, with 10-20 room "boutique nursing homes" recently opening, combining the less institutional atmosphere that comes with a small size with the economies of scale of multiple residents.

Closing thoughts on household size
Throughout most of history the typical household has had a size of 10-20 people, and perhaps the nuclear families, couples, and singles of the 20th century are a historical anomaly, when transportation and migration moved faster than society could catch up.