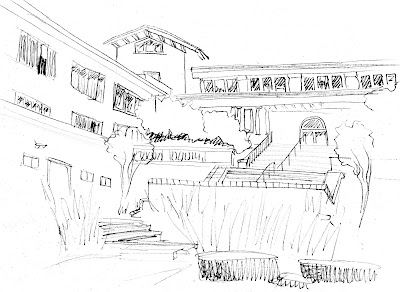 Many trips up and down Warring street made me aware of a Julia Morgan mansion with an extended front staircase. It was clear this was not a Greek house because there was a half-manikin-half-art-piece in the front yard, a few vegetable plants, and good deal of weeds. Later, I peeked through the back window and spotted a “Where the Wild Things Are” mural on the opposite wall. Yep, this was a co-op all right. 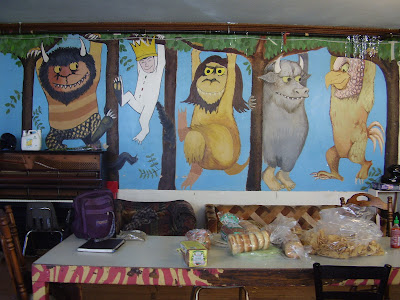 In 1906 Julia Morgan designed this house for George Washington Merrill and his family. At the time there were no houses across the street and no International house. The view of the bay was the centerpiece of the project. In the 1930s, a sorority took up residence in the home, expanding 20 years later to add the northwestern wing. During the counterculture movement of the 60s, the house became a cooperative. It was named after Andres Castro, a cook at the BSC’s central kitchen during the period in which meals for all the cooperative houses were prepared centrally. 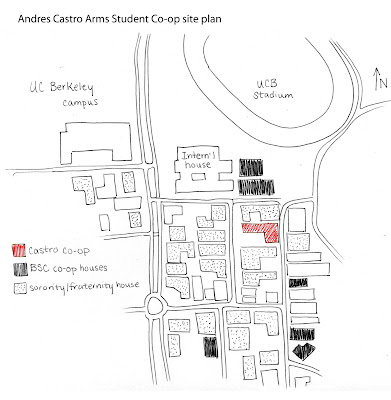 Castro is located on a block of sororities, fraternities, and two other co-ops (Davis House and the African American themed house). It is a five minute walk to the UC Berkeley campus and a two minute walk to the football stadium.

The key outdoor spaces at Castro are the front deck and the higher of the two rooftops. Both are places where residents spend time reading and talking in the sun or watching the sun set over the bay. 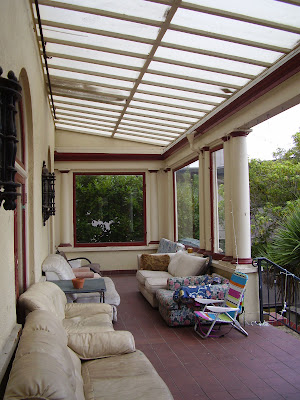 The front porch is the only ADA accessible outdoor space. The porch overlooks the front staircase and garden. Julia Morgan celebrates the front stairway as an important social landscape by extending it halfway across the yard. The staircase has taken on a different personality since the view of the bay was blocked by multi-story student housing; residents traveling up and down generally greet each other and keep moving. The addition of the west wing also makes the front stairway more visible to those with rooms with south facing windows. 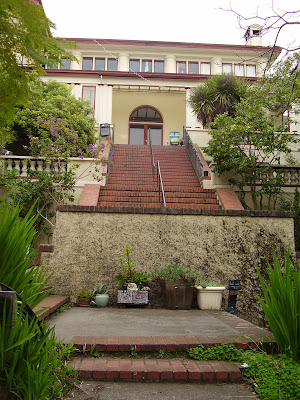 Co-opers from nearby houses sometimes visit Castro to watch the sunset from the upper roof. The lower roof (over the west-wing) doesn’t get much sunshine or have much of view, but it does have an array of solar panels and space to hang laundry. In a sustainability audit of Castro, they noted that the lower roof doesn’t drain very well. Residents don’t spend much time on the lower roof. 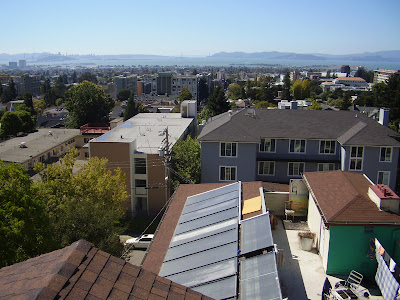 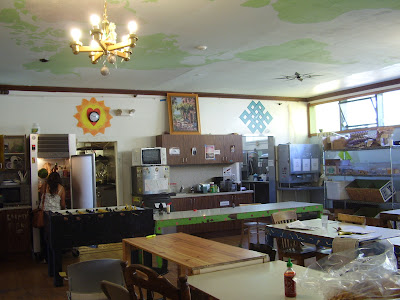 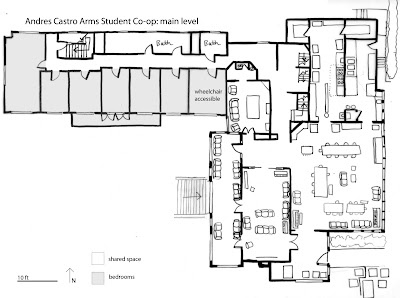 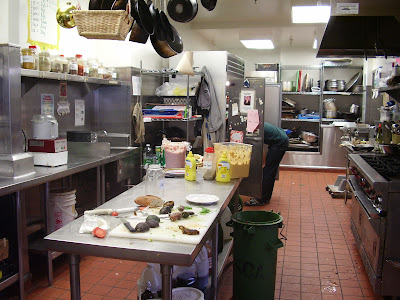 The maintenance room, study room, free pile, and laundry machines are on the basement level. 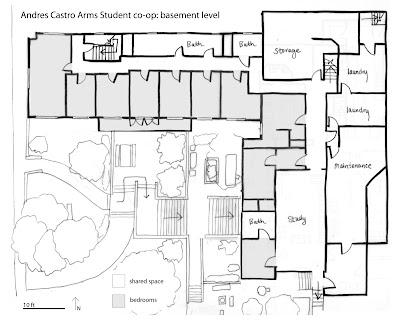 The east and west wings: 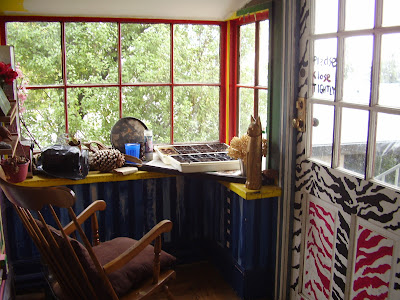 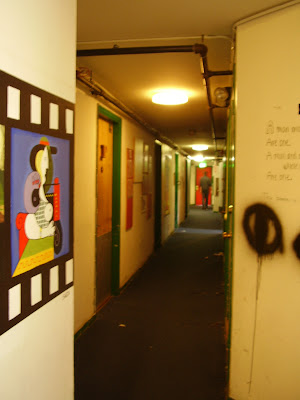 Room selection in the co-ops is based on a seniority point system. The longer one lives in a co-op, the more points they have to bid on a new room with. Alex told me that Castro is more or less divided: younger/newer co-opers end up in the mediocre west-wing rooms and older co-ops bid into Julia Morgan rooms (often with views out over the bay) like the rooms shown in the plans below. This division creates a hierarchy within the house that upsets the sense of house unity. 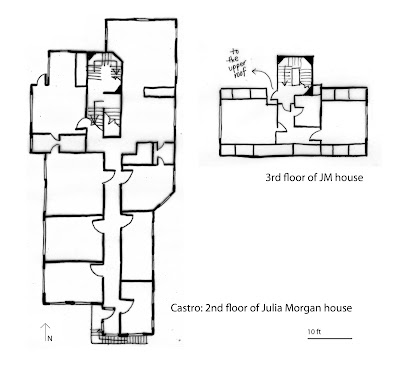 For Alex, Castro is the best house to live in with a wheelchair because the common space is largely on the main floor. He also has access to a sunny porch and his own personal restroom with a key—sharing the bathroom would tricky. He chose not to live in other co-ops because they lacked sufficient common space on the main floor, were too far from the university, and/or they were just too big of a house (120+ residents). He would have preferred more outdoor accessible common space and access to the study room at Castro. 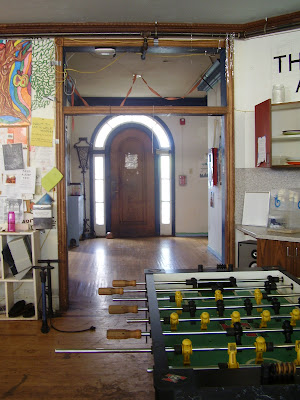 Alex guessed that about 70% of foot traffic enters through the front door (shown above) with the remaining 30% entering through the back door (shown below). The entrance to the west-wing from Warring street also gets a fair amount of use. The doors are always locked, although frequently propped in fair weather. 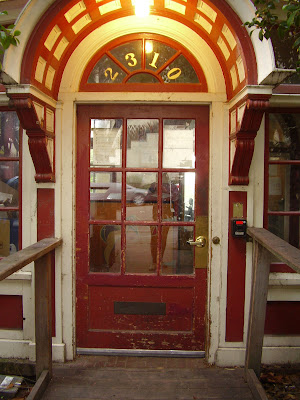 Castro’s ADA accessibility is greatly enhanced by all of the interconnecting common rooms on the main floor.

The significant difference in the quality of the rooms in the east and west wings poses a serious challenge for this co-op. It is important for new members of a co-operative house to interact with older members of a house and feel welcomed. The spatial division of the house into older and younger members will systematically decrease those interactions. West wing shown below. 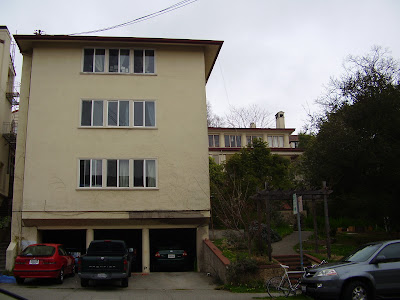